I get questions every now and then as to what modifications I have made to my personal Glock 19's or why I modified them a certain way, so here is a list of those mods and my reasoning behind them. 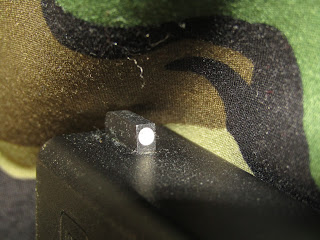 If your Glock is equipped with the standard, plastic sights, then aftermarket replacements are a must. The plastic sights are easily damaged and easily moved in the dovetails. I prefer Ameriglo sights with a bright painted dot on the front sight and a plain, black rear. They are durable and affordable. The painted front/plain rear combo naturally draws my focus to the front sight, where it should be, with no distracting dots or markings on the rear sight to shift my focus. Why don't I use tritium or fiber optic sights? I'm not against them. I just feel that they are not as necessary as they are made out to be, and that the money I save by using plain sights is better spent on ammunition and training.

Grip plugs are affordable and simple to install. I often see them being marketed as a way to keep debris out of the action, but that is not why I use them. When inserting a fresh magazine at speed I often catch the case rim of the top round on the rear lip of the magazine well, causing me to fumble the reload. The grip plug eliminates that lip and its rounded surface acts as a low-profile version of the large mag well funnels that competitive shooters often use.

I love Grip Force Adapter beavertails! Without them, the web of my hand between my thumb and index finger gets eaten up by Glock slides. If you own a Generation 4 Glock this is a non-issue as they have interchangeable backstraps, including one with a beavertail. For pre-Gen 4 Glocks, though, these are the way to go if you suffer from slide bite. Several custom firearm companies will mold a beavertail into your polymer handgun frame, but they cost several hundred dollars plus the hassle of shipping a firearm. Grip Force Adapters, on the other hand, are $26.95 a pair, including shipping.

This modification is specific to me. I would not recommend this to anybody unless they suffer from the exact issue that I was having. I grip the gun unusually high with my support hand to give me extra leverage and increased recoil control. However, I had problems with my support hand pinning the slide release in place when using this grip method. This prevented the gun from going to slidelock on an empty magazine.

I began experimenting with a reduced slide release on my range gun. I completely removed the "paddle" portion of the release that rode alongside the frame, but left enough protruding from the frame that I could drop the slide using my strong hand thumb. This modification has worked 100% for several thousand rounds, and I have since made an identical modification to my carry piece (pictured). The only downside to this mod is that there is not enough material protruding from the frame to push up on, so if I need to lock the slide back for administrative purposes I have to do so using an empty magazine.

Glock extended mag releases are affordable and simple to install. They allow me to more easily hit the release with my strong hand thumb. The only issue I have with these is chaffing when carrying in-the-waistband (IWB) at 4 o'clock with my Crossbreed Supertuck. However, since most of my carry these days is appendix-in-the-waistband (AIWB) for concealed carry or outside-the-waistband (OWB) for competition, the juice is worth the squeeze. 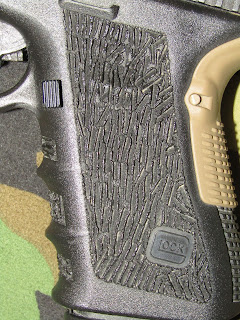 If you are considering DIY'ing a stipple job on your polymer handgun frame, I recommend putting a lot of thought into it beforehand. It often reduces the resale value of the gun and if you botch it you will be forced to pay several hundred dollars for a replacement frame. If you decide to go through with it, spend time researching on gun forums and practice on polymer magazines and cheap, plastic parts before mutilating your frame.


I used a $12 wood burner from Wal-Mart to texture my grips. I wanted my texturing to be functional, but still aesthetically pleasing. It's not a Boresight Solutions or Bowie Tactical stipple job, but I think it is above average for a DIY job. I tried to stay conservative and use the factory lines where I could. I textured the grip panels, the frontstrap, the trigger guard, and the dust cover. If I had it to do over again I think I would leave the dust cover alone. If I owned a Gen 4 or RTF Glock, I don't think I would do any stippling. They seem to have adequate factory texturing for my purposes.

Things I have not Modified

I have not modified the internals of my Glocks at all. If it ain't broke, don't fix it, right? I have reliably put rounds on a silhouette target out to 100 yards using the factory barrel and trigger, so I don't know that I'll gain a whole lot by replacing or modifying them. I am toying with the idea of installing Glock-brand "Minus" connectors on my guns, though, to see if there is a noticeable difference. My range gun just passed the 20,000 round mark with about 15 stoppages that cannot be attributed to faulty ammunition, bad magazines, or user error. So I think the action is good to go, too. No need to replace something that works.

Let me close this post by encouraging you to be smart. Think carefully before modifying firearms. Go shoot them for several thousand rounds and then you'll have a better understanding of what needs improvement. Don't modify your firearm simply because somebody on a forum did it or because your favorite gun celebrity put his name on a new widget. Most of the time your money would be better spent on ammo and training.