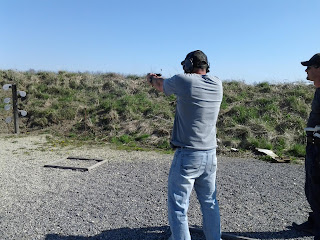 Scotty served as an 0311 Rifleman in the U.S. Marine Corps from 2004-2012. Between 2005-2008 he deployed three times to combat zones in the Middle East where he served as an automatic rifleman and fireteam leader. From 2009-2012 he served at The Basic School (TBS) in Quantico, VA where he supported training exercises for newly minted Marine lieutenants. During his time at TBS, Scotty earned several Marine Corps instructor certifications and began attending open enrollment firearms training on his own time. After leaving the military Scotty continued to seek professional firearms training and dabbled in competitive shooting and combatives. He was a cadre member at Tough Times Training, is an assistant instructor at Protective Shooting Concepts, and teaches handgun classes under his own banner. When he is not on the range, you can find Scotty reading, attending concerts, and spending time with his wife of eleven years, his three children, and friends from his local church.

We believe that the ideal way to win a fight is avoidance, but our mission is to provide you with the tools to protect yourself and loved ones with a firearm when avoidance is not an option.