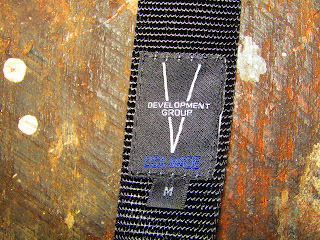 A solid pistol belt is often an overlooked piece of gear for the concealed carrier. Folks assume that the average Walmart-grade leather belt will be good enough, and for smaller pistols it very well may be. If you plan to carry a large-framed pistol, though, such as a Glock 17 or a Government Model 1911, a purpose-built pistol belt will do wonders to enhance your level of concealment. Good pistol belts are typically crafted from thick (often two layers) leather or rigid webbed material (many of the webbed belts are based on climbing and rappelling gear that has nothing to do with concealed carry). They may also feature internal stiffeners to further increase rigidity. While these stiff belts do wonders to hide large-framed pistols in your waistband, they aren't always comfortable. I don't have a huge issue with mild to moderate discomfort (thanks, Marine Corps!) but my belt was getting to the point where it was consistently causing lower back pain when worn for extended periods. I was considering moving to a slightly less rigid pistol belt when I came across V Development Group's Megingjörð AIWB Pistol Belt. If you're scratching your head wondering what Megingjörð means let me save you a trip to Wikipedia. Megingjörð was Thor's belt in Norse mythology. A fitting name for such a good product. 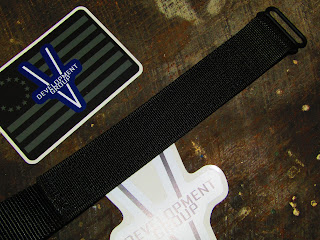 The concept behind this belt is so simple I can't believe nobody thought of it before. Instead of making the entire belt from uncomfortable, rigid material, they only used this type of material on the section of the belt that contacts your holstered firearm. The rest of the belt is crafted from a more pliable material that isn't so hard on the love handles, hips, and back. The catch is that this belt is primarily designed with AIWB carry in mind. However, you can rotate it so that the rigid portion is contacting your holstered firearm in whatever carry position you prefer. 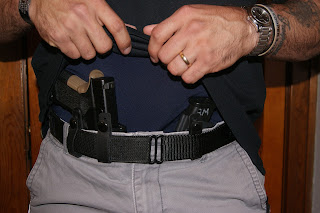 Another feature that I really appreciate about this belt is the simple, low profile buckle. My last pistol belt didn't have a gargantuan buckle by any means. But it did print badly when it was right next to my pistol in the AIWB position - one of several reasons I started rotating the belt so that the buckle was on my side. The buckle on the Megingjörð is solidly constructed and doesn't print at all. 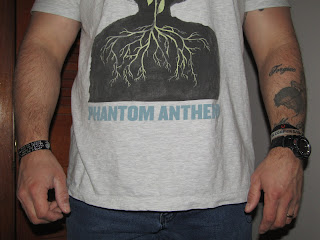 The Megingjörð does have limitations, though. Being purpose built for AIWB, it's not really suitable for carrying OWB or for carrying anything much more than a pistol, spare mag, and maybe a blade. It's kind of the opposite of the "jack of all trades, master of none", which is fine with me since I pretty much only carry concealed anyways.

I got the Megingjörð back in March and haven't worn any other pistol belts since. It provides the same level of concealment as my other belts, but without discomfort. I've worn it on trips, at the range, to a two day pistol class, and even to work (more or less a gun-free zone) without my pistol. Even with no pistol the rigid portion of the belt caused no discomfort. One concern I had was about the velcro that is used in conjunction with the buckle. The buckle "system" is dependent on the velcro to the point that if the velcro doesn't work the belt won't work. It turned out to be very strong, though. I haven't had any issues with it coming loose no matter how tight I've cinched it. Interestingly, the first few times I wore it I thought it was too loose and over-tightened it. Later I realized that it wasn't too loose at all. I was just so accustomed to having an uncomfortable belt that I mistook the lack of discomfort for being loose. If you're looking for a belt that offers the same level of retention as the typical rigid pistol belt, but is worlds more comfortable this may be your ticket. Head to vdevgru.com to learn more about the Megingjörð and other great products like holsters, medical gear, EDC gear, and swag.