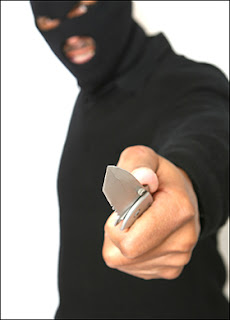 Where I live in the northern foothills of the Appalachians, meth and heroin are rampant and jobs are often scarce. Many people have little to lose and they come in all age groups, genders, races, etc. With that in mind, I'd like you to think about what a violent criminal looks like in your head. You're probably thinking of a young male adult who looks intimidating and may have a stocking or a ski mask covering his face. That's not always the case. See this local news story from Steubenville, OH where several kids, ranging in age from 11 - 15, discharged a firearm in a movie theater. Are you prepared to defend your family against a 12 year old boy? Have you considered the mental trauma that you could face in the aftermath of having shot and possibly killed a child - even in self-defense?


What about a female attacker like this incident in Fresno, CA? She attacked a 70+ year old Vietnam veteran in an auto parts store parking lot in broad daylight, demanding that he give her his wallet. In researching news stories for this post it was clear to me that most of the times that a man has been violently attacked or killed by a woman the two knew one another, but anomalies like the above story do happen.

What if your attacker is an elderly person? Tamara Samsonova is suspected to have murdered over ten people in St. Petersburg, Russia. One was a 44 year old (and I'm assuming able-bodied) man. See the story here.


There are numerous instances during the US military's time in Iraq and Afghanistan of attacks on military personnel by women and children. I was once on a patrol that was attacked by a young boy of about twelve who was hip firing an AK-47. Fortunately, he didn't hit any of us and was in such a hurry to get out of Dodge that none of us had time to engage him with accurate fire after he expended his magazine and beat feet. We were, however, mentally prepared for that scenario and were not hesitant to engage anybody that posed an imminent threat to us.

That is not to say, though, that it would be easy to live with having done something like that, even if it was justified. The aftermath and its mental and emotional effect on you are also something that you should expect and prepare for. Good information on this topic can be found in Lt Col David Grossman's books, On Killing and On Combat. Not everybody agrees with his findings, but these books are worth reading so that you can make up your own mind.

The point of this post is not to be morbid or to scare anybody. I also realize that, even among violent crimes, these instances stand out as abnormal. The point is that you mentally prepare yourself to some degree no matter how remote the possibility. What are your thoughts?