The Noisy Cricket: Is a Tiny Handgun Right for Me? 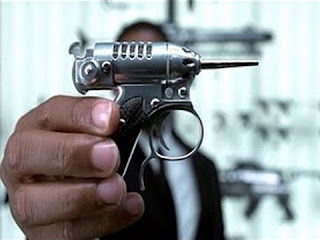 How many of you recall the "Noisy Cricket"? It was the gun that Will Smith's character was issued in the 1997 movie, "Men in Black". It seemed ironic that the smallest gun in MIB's inventory had such violent muzzle blast and recoil. As funny as it was to watch on screen, these characteristics really aren't far off.

Many folks looking to carry concealed purchase the smallest, most conveniently carried handgun they can find. Many ladies seem to wind up with these guns, as it is harder to conceal a handgun in women's clothing, and there seems to be a "little gun for the little lady" mentality among their husbands, boyfriends, and many gun store clerks. The problem is that these guns have many characteristics that make them less than ideal for less experienced shooters. Many pocket pistols and snub-nosed revolvers have/are:


Pocket pistols truly are the most easily concealed firearms on the market, but that is really their only positive attribute. They have their place, but I don't believe they are ideal for new or less experienced shooters. If you are a new or less experienced shooter, try out as many handguns as you can before purchasing. If that's not an option and/or you wind up with a handgun that you're not confident in, don't be afraid to sell or trade to get something better. My wife and I went through this same learning curve when trying to find her a carry gun. We went through several guns, including a "Noisy Cricket" before settling on the Glock 42. The Glock 42 is a single-stack sub-compact handgun chambered for the .380acp cartridge. It is small enough to be easily concealed, but is not tiny. It is reliable and has adequate sights, a reasonable trigger, and enough grip that the shooter can easily control it. It's only possible downside may be its small ammunition capacity, but statistically speaking, it holds more than enough rounds for the average civilian self-defense scenario. I think something like the Glock 42, Glock 43, Smith & Wesson Shield 9mm, or Walther CCP would be a reasonable compromise for those of you who want concealability in a shootable package. I believe that something like a Glock 19 or Smith & Wesson M&P is ideal if you can conceal one.