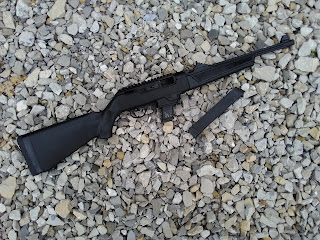 I'm getting closer and closer to labeling the PC Carbine a range toy, not for serious use. I ran about 75 rounds of 115 grain Federal Champion Aluminum through it at the range this past weekend with no ammo-related issues. Then, I ran the Resolute Response 25 yard Rifle Standards. I'll probably outline this assessment/drill in a future post, but for now I'll just say that it consists of 22 rounds fired in 6 timed strings. It's no mag dump, but it is fired at a substantial pace and has a tendency to warm the barrel. After what I considered a pretty dismal score on my first attempt, I decided to give it a second try. Aaand, yep, you guessed it - the fore-end screw loosened again. I didn't bother tightening it and it didn't get significantly worse. I only fired 75 rounds, though, so it may have gotten worse if used for an extended period. I still haven't gotten around to removing, properly degreasing, and applying thread-locker to this screw, so my procrastination may be partially to blame. I checked all other screws and found that nothing else had loosened.

After getting a more acceptable score on the RR 25 yard Rifle Standards, I did some target-to-target transitions between an IDPA target placed at 7 yards and an 8" steel plate at 25 yards. During one of these reps I felt a dead trigger, conducted an immediate action drill, and attempted to fire again - another dead trigger. I assessed the gun so that I could begin remedial action and saw that nothing was amiss. The magazine was fully seated and there was an unobstructed round in the chamber, but the trigger would not reset. I cleared the gun and checked the receiver screws and barrel adjustment knob. They seemed tight. I cycled the action several times and still got a dead trigger. I have seen loose barrels cause issues with shotguns before, so, although it seemed tight, I removed the barrel and went through the installation SOP anyways.


After installing and tightening the barrel, the trigger finally reset and I was able to finish my range session. Going forward, I plan to modify my barrel installation SOP per this thread on the Brian Enos Forum and see if this method works well.