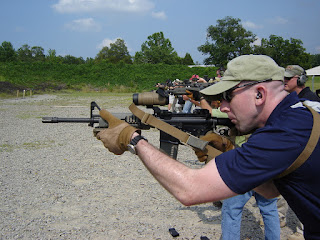 This review was originally posted here in 2012. All photos in this review were taken by Defensive Concepts NC staff.

I have pretty standard military firearms training and was fortunate enough to attend the USMC Foreign Weapons Instructor Course a couple of years ago. Outside of the military I have trained with Tom Perroni of Commonwealth Criminal Justice Academy in his Handgun I and Carbine/M4 I courses.

This class was taught at Trigger Time in Carthage, NC. It was $150 plus a $25 range fee and the ammunition requirement was 500rds for your carbine.

Please forgive me if I leave something out or get anything out of order. It was a 90+ degree day and I had a 4 hour drive home after class. I started the day at 7:45am at Trigger Time filling out my hold-harmless paper along with 11 other students. Chris and Steve began the class by formally introducing themselves and giving a little bit of background. Chris is former Army Airborne and is currently an LEO in NC. He has trained with Paul Howe, Ken Hackathorn, and a plethora of well known firearms instructors. Steve is former Marine Corps Infantry and has trained with names such as Larry Vickers and James Yeager. The students were a wide mix of backgrounds including current and former military and defense-minded civilians. I saw a variety of AR15’s in the mix along with a Bushmaster ACR and Sig 556.

We spent the first hour getting our carbines solidly zeroed. Chris and Steve took a lot of time helping everybody out during the zero process, both on the firing line and while analyzing our targets between strings of fire. It paid off later that day when we shot from a little farther out during the walk-back drill. After all carbines were zeroed Chris talked about stance. He advocates a slightly bladed, natural stance that is neither as bladed as a match shooting stance nor totally squared up like so many shooters use today. We conducted multiple strings of fire from the standing and then Chris moved on to the three types of kneeling: unsupported, supported, and “Monica”. Once we had become comfortable firing from these positions we took a one-hour lunch break.

After completing our lunch break we got back on the range and Chris gave us a brief talk and demo on emergency reloads. He teaches a pretty simple emergency reload that does not involve launching magazines to the side or anything of that nature. Once you realize your magazine is empty simply drop the mag, bring the carbine up into your work space, insert the fresh mag, and press the bolt release. We conducted some live-fire emergency reloads and then Chris had us conduct a walk-back drill with the added pressure of a shot timer. We started around the 25yd line and continued to move back until we had reached about 100yds. At that point the ground had sloped to such a point that if we continued to move back the target would have been completely obscured. I did much better than I expected and stayed in the running until around the 100yd line when all but the head of the target had been obscured. I believe all of my hits were achieved in under 2 seconds. Maybe not impressive to some, but still better than I thought I would do. One interesting note was when another student added his 3x magnifier for the walk-back drill. He had trained all day without it and when he did add it he was out of the walk-back drill pretty quickly. Later, though, he achieved hits on the same target at longer distances without his magnifier.

With the walk-back drill out of the way Chris talked about malfunctions, stoppages, and the IA drills we should use to clear them. I have always been taught to use the “tap, rack, bang” method to clear malfunctions in the military, but Chris pointed out that slapping the bottom of a magazine could induce a double-feed if the feed lips are sufficiently worn. Therefore, he replaces the “tap” of “T, R, B” with “push/pull”. It is pretty self-explanatory and ensures that your magazine is properly seated without the possibility of inducing a double-feed. Once we had practiced malfunction clearing for a little while we moved on to double-feeds. Chris showed us how to clear them as well as how to set them up in our carbines for training purposes and then we practiced that for a while.

By now it was almost 5pm and Chris & Steve decided to make things pretty interesting. They had us conduct a snake/battlefield pick-up drill with the winner being the fastest time who was able to clean the course of fire. I started about 30yds from the beginning of the snake drill with my back turned. Once I heard the buzzer from the shot timer I sprinted to the starting point to find a left-handed ACR with a double-feed awaiting me. I gamed the hell out of clearing the double-feed and didn’t realize it until later. I was a little annoyed at myself, but am going to make clearing double-feeds a regular part of my dry-fire training. I finished the drill and, while I didn’t clean it, I did make up my missed shots and turned in a respectable time. The winner of the drill received 25% off his next DCNC class.

Once we were done training for the day we sat down with Chris & Steve and debriefed about the pros and cons that we felt the course had. The only issue I could think of (and this is nitpicking) was that we were limited by the range as to how far we could shoot. However, this was a basic course and long distance shooting wasn’t part of the curriculum, so I can’t complain too much.

Throughout the day safety was paramount. There was an emergency medical professional on site and the instructors ensured that PPE was worn during all courses of fire and that firearms and ammunition were handled safely at all times. All drills were explained in detail before we were required to perform them. On some of the more complex drills Chris & Steve had us perform a few dry runs before live-firing. All drills were demonstrated by our instructors and we didn’t just blow rounds off for no reason or “ballistically masturbate” as Chris put it. Mistakes were corrected and many of us got a lot of pointers. Everybody left with some solid fundamentals and drills to work on. Chris says that he uses the curriculum as a guideline and tailors each class to its students, but this was still a very structured and goal-oriented course.

I ran a Colt 6920 as my primary carbine. It is outfitted with a VTAC padded sling, a Battle Comp 1.0, an Aimpoint Comp M2, a Daniel Defense MFR, and a few other goodies. The internal components of the carbine, though, are completely stock. I ran a mix of P-Mags and GI mags and carried my combat load in Blade-Tech mag pouches, a Blade-Tech holster, and an Emdom dump pouch. They were all mounted on a Safariland duty belt and Eagle belt pad. All of my gear functioned 100% and gave me no trouble.

This was an awesome course. It pushed me and revealed areas where I need work as well as areas where I am better than I thought. The instructors are professionals with real world experience and held us to a high standard of accuracy throughout the day. 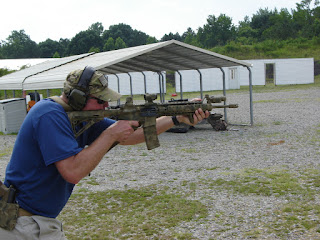 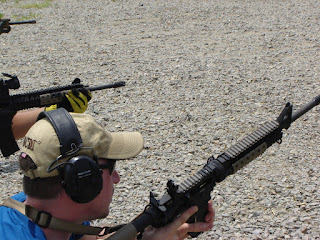