The AR15 for Home Defense? 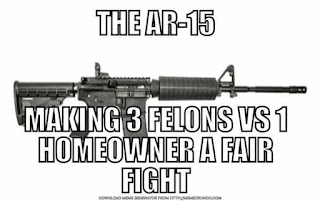 I was perusing my Facebook feed over the weekend when I came across a gun control debate on a friend's page. A lone gun control advocate bravely stood against a horde of rabidly pro-gun West Virginians, criticizing the use of an AR15 by the intended victim of a home invasion. Unfortunately, instead of focusing on his philosophical stance for gun control, he strayed from his lane and made several erroneous statements about the ballistic capabilities of the 5.56 NATO round and other "military-grade bullets." To my dismay, none of the firearms enthusiasts involved in the debate refuted this.

Despite what the gentleman in these screen shots thinks, the AR15 is a viable choice for a home defense firearm. First, we'll look at its ballistics. Due to its high velocity, the 5.56 NATO round has a tendency to fragment or yaw when penetrating tissue. This means a more devastating wound than a handgun caliber and less chance of over-penetration than many defensive handgun and shotgun loads. So no rounds penetrating homes for multiple city blocks.

If the 5.56 NATO round is less likely to pose a threat to property and people other than the target due to over-penetration, then the biggest danger to your neighbors would be a missed shot. This brings me to my next point. The AR15 is easy to use effectively. When firing a handgun, you have only two points of contact with the firearm - your dominant hand and non-dominant hand. With an AR15 (and most other long guns) you have four points of contact with the firearm (cheek, shoulder, dominant hand, non-dominant hand), providing a much more stable shooting platform, and drastically reducing the odds of a miss. The AR15 has less recoil than most shotguns, making it easier on the elderly, those of small stature, and others who may be recoil-sensitive. Assuming that you don't live in a ban state, AR15's also have greater capacity than both pistols and shotguns. "But why would you need 30 rounds for home defense?!" you ask. Because bad guys don't always travel alone and they don't always stop what they're doing after the first shot. Also, there's no penalty for having rounds left after a gunfight. Finally, the AR15 is one of the most ergonomic, customizable firearms to see widespread use in the United States. Most of its controls are easily within reach of the shooter's dominant hand, its stock is adjustable, and it can be outfitted with a white light for identifying targets and non-magnified, red-dot optics for a more intuitive sight picture.

While there are some pretty serious advantages to using an AR15 as a home defense firearm, there are also disadvantages, mainly due to its length. The average AR15 is about 36" long. That may be a hindrance if you have to navigate a small hallway, doorway, or corner. It may also be easier for the bad guy to gain control if a hand-to-hand fight ensues. If you feel that you may need to maneuver through your home, consider a handgun. It is more easily retained during a hand-to-hand fight and is easily operated with one hand. This leaves one hand free to dial 911, corral children, operate a white light, etc.

Take a careful look at your situation and consider the advantages and disadvantages of pistols, shotguns, and rifles for home-defense. An AR-style rifle may be the ideal choice for you. A combination of a pistol and a staged long gun may be your choice. Either way, don't let internet folklore prevent you from choosing your ideal firearm.

For more in-depth information on this topic, I highly recommend checking out Dr. Gary Roberts' stickied threads in the pistol-forum.com ammunition sub-forum. Specifically his piece on Home Defense Long Guns.