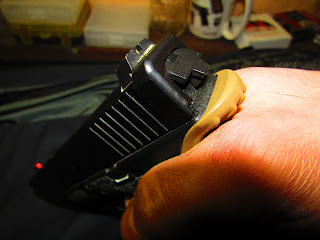 During handgun classes I teach my students that one of the most likely times to have a negligent discharge (ND) is while re-holstering. I teach them to look into the mouth of their holster for debris or obstructions and to re-holster slowly, feeling for any abnormal resistance. Debris and obstructions could include a shirt tail, coat drawstring, or even a damaged or worn holster. Whether you carry a pistol on your hip or in the appendix-in-the-waistband (AIWB) position, a ND can cause significant injury or death. When you consider that many modern handguns have only trigger safeties you see how easily a ND could occur during a momentary lapse of awareness. Enter the Tau Development Group's Striker Control Device (SCD). 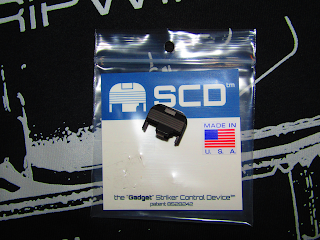 I first heard of the SCD several years ago on the late Todd Green's excellent website, pistol-training.com. At that time it went under the moniker "The Gadget". Todd was looking for a device to provide an added layer of safety when he re-holstered his Glock 17 test pistol and arrived at this concept. When re-holstering, the SCD works much like the hammer on a double-action pistol: ride the hammer with your thumb as you re-holster and you will feel and provide resistance against any obstructions that are putting pressure on the trigger. It is currently only available for Glock handguns (except models 42 and 43) and consists of a replacement slide plate with a hinged flap that moves rearward with the striker as the trigger is pressed or, when pressure is applied to it, prevents movement of the striker and trigger.

A limited number of test Gadgets were developed and distributed to a number of shooting enthusiasts and firearms instructors including Craig Douglas, whose flagship Extreme Close Quarter Concepts class is known for being especially brutal on students and their equipment. After all was said and done the test Gadgets saw over 300,000 rounds of live-fire testing with no reported mechanical failures. This is due to the fact that, despite the hinged flap, the SCD was designed so that the internal slide components are not exposed during the cycle of operation and will not be exposed in the event that the SCD is damaged or broken. The SCD is also a passive device, meaning that if it is damaged or broken it will not interfere with the cycle of operation. 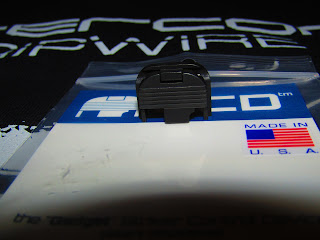 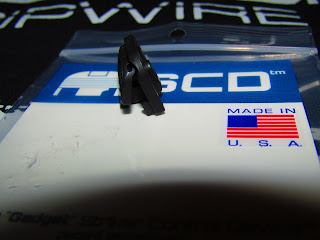 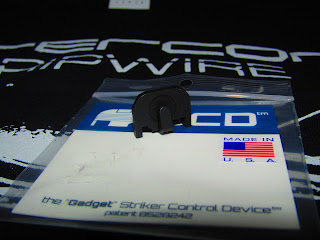 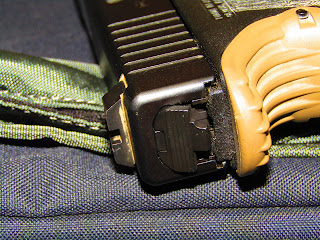 My interest was piqued, and I eventually pre-ordered my own Gadget during their Indigogo campaign. After placing my pre-order, I ran across a pre-release, test Gadget when I met fellow instructor Jay Cunningham of Protective Shooting Concepts at a pistol class. He was kind enough to let me get some trigger time on his Gadget-equipped Glock 19 and it confirmed my thoughts that this was a good concept.


A short time later, my standard production version of the Striker Control Device arrived in the mail. It's a small, but sturdy piece of gear, CNC machined from stainless steel, oxide finished, and made in the United States. Since installing it on my Glock 19, I've abused it for over 2,000 rounds with no issues. The added layer of safety against human error was well worth the money. I don't plan on re-holstering without looking or with my shirt tail in the trigger guard, but if I do screw up it's nice to know that I've lessened the odds of taking one to the baby-maker or femoral. From the TDG website:

"The SCD provides an extra layer of safety when holstering. It does NOT replace awareness and safe gun handling. It creates an additional layer of safety to help avoid accidents. ALWAYS follow the four cardinal rules of firearms safety."