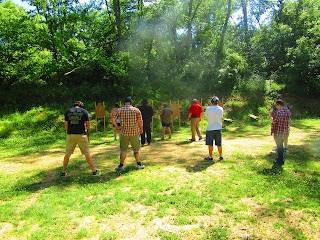 Most introductory-level tactical or defensive pistol classes I've attended cover the instructor's method of accomplishing a variety of tasks. The tasks usually include marksmanship, drawstroke, reloads, and malfunction clearances performed at distances of 7 - 10 yards. While these skills are important, some are unlikely to be needed in a civilian self-defense context. What Jay Cunningham and Ashton Ray of Protective Shooting Concepts (PSC) have done with their Protective Pistol I class is narrow their curriculum down to the skill most likely needed in a self-defense scenario - the ability to quickly deliver lethal hits at interpersonal distances. In their level 2 and 3 classes they introduce skills that are important, but less likely necessary, such as reloads, malfunction clearances, and long-distance shooting.


We began Protective Pistol I with instructor and student introductions and one of the best explanations of the firearms safety rules that I've heard. Jay and Ashton explained the safety rules not only as guidelines to follow when administratively handling firearms, but also put them into real world context as they would apply during self-defense scenarios. Part of the safety brief also included a lecture on risk analysis. PSC encourages students to view all of their activities and choices through the lens of risk analysis. They define risk as "Probability x Consequences". We perform risk analyses multiple times everyday without realizing it. Take seat belts for example - I probably won't get into an auto accident while driving to the range this week, but the consequences (serious injury or death) of neglecting to wear my seat belt are so high that I still wear it despite the low probability of an accident. We can also use this concept to make better decisions concerning our personal safety - from what type of firearm to carry, how many spare magazines to carry, places we will or will not go while unarmed, etc.

Jay and Ashton then covered the PSC shooting methodology. One area where they differ from many instructors is their method of manipulating the trigger. In a high-stress situation it is likely that we won't be able to get perfect trigger finger placement or press the trigger with the precision of a seasoned bulls-eye competitor. PSC advocates aggressive trigger manipulation (like we are going to anyways in a high-stress event) while properly gripping the pistol with enough strength that you're not throwing shots. Jay had each of us practice this with something he calls the "Grip Check Drill". I won't go into detail, but he had folks with barely any firearms experience putting accurate hits on target from a modified ready position in under .30 seconds! Their grip and trigger methodology works. I've personally run the Grip Check Drill accurately out to 15 yards while making the .30 second par time. 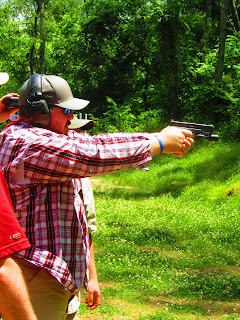 We continued building up to the culminating drill by adding the fending position, drawstroke, sidestep, multiple shots, and a post-engagement scan/equipment check to the equation. Along the way we received instruction on each additional step and an excellent lecture on mindset from Ashton. 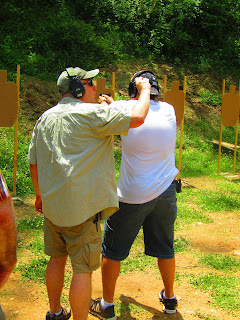 For our culminating drill we engaged a USPSA A-zone target at 3 yards with 3 rounds in under 3 seconds from concealment while sidestepping. Each student ran this drill individually with Jay timing them. Most passed with flying colors. One student who passed was actually doing it for the second time. It was nice to see that since her last class, she put in the work necessary to improve and pass the drill. 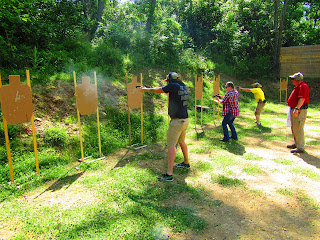 As far as gear is concerned, I used a Gen 3 Glock 19 with a Sintercore Deadfall slide plate, Ameriglo steel sights, a GFA beavertail, DIY stipple job, and minus connector. I stowed my pistol in a C&G Holsters Covert IWB, and shot my 115gr 9mm reloads. I saw other students using a Springfield XD(M) .45 Competition, a Walther PK380, and a variety of Glocks including one very nice Roland Special. The instructors used a Colt CCU 1911, a Smith & Wesson M&P9, and an HK VP9. The only gear-related  issues I saw were with SERPA holsters, the Springfield XD(M), and the Walther PK380. Most of the issues seemed to stem from equipment that was poorly suited to the user, but nothing mechanically wrong with the gear itself. Towards the beginning of class Jay and Ashton talked to us about gear. They recommended a few brands specifically. They use and/or recommend kydex holsters from C&G Holsters, Dark Star Gear, First Spear, Safariland, JM Custom Kydex, and Raven Concealment. They both use and recommend Surefire weapon-mounted lights with DG switches. Ashton, a certified lubrication specialist, gave an excellent lecture on proper pistol lubrication. He recommended weapon lubricant from Weapon Shield, Slip 2000, and AMSOIL.

This was one of the best introductory level firearms classes I've attended. Jay and Ashton covered so much good material that I couldn't fit it all into one blog post. Everything that they covered was practical, relevant, and very well thought-out. I highly recommend training with these guys. If my recommendation alone is not enough I've put my money where my mouth is and signed up for their low-light pistol class, Protective Pistol Dark, later this year.